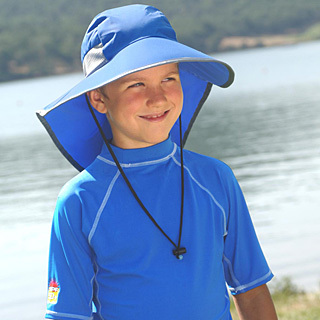 Bearing in mind that sunscreen does not provide complete protection, wearing an appropriate hat outdoors is an excellent way to reduce ultraviolet radiation to the face, head and neck. If children can become accustomed to wearing a hat outdoors at school, it will be a tremendous step toward the development of improved sun protection lifestyle habits.

For quite some time hats have been prohibited at most schools due to concerns regarding gang association or sloppy attire. At some schools, children could not even wear a hat with a doctor's note. To overcome this obstacle, legislation was initiated and sponsored by the William S. Graham Foundation for Melanoma Research. California Senator Don Perata (East Bay / Oakland) introduced the bill which was designated as California SB310 (Billy's Bill for Sun Safety.) The bill passed and became effective January 1, 2002. SB310, added as Section 35183.5 to the California Education Code, requires that

SB310 effectively grants discretion to parents and pupils to decide for themselves whether the child will wear a sun-protective hat for outdoor activities at school. Yet schools retain significant authority to define the type or style of hat that will be allowable, to prohibit gang-related and other inappropriate hats, and to prohibit the wearing of hats indoors. Conscientious school administrators will recognize this as an opportunity to establish policies and explore incentives which encourage as many students as possible to wear hats while outdoors in order to reduce their risk for the later development of skin cancer.

While the importance of a hat as part of any sensible sun protection program cannot be overstated, there might be resistance, particularly in secondary schools, if policy should be abruptly reversed from one which prohibits hats to one which requires them. By contrast, a firm requirement of "No hat, No outdoor play" might be enthusiastically endorsed by parents of pre-school and some elementary school students, particularly during summer sessions. For most schools, we recommend a gradual phase in of sun-protective hats. Start by communicating to parents the cancer prevention rationale for your new hat policy and ask parents to encourage their children to wear a hat outdoors not only at school but for all outdoor activities. Notify and occasionally remind parents of the new policy, ask student leaders to start wearing a hat outdoors, and offer incentives. After a few months, evaluate the level of cooperation to determine whether there is any need for refinement either to your policy or to the hat selection. This could be the first step toward making sun protective hats more strongly encouraged or perhaps required at some time in the future.

In consultation with representative students, parents, and staff, the school administration should set the revised hats policy to include not only the definition or description of what hat(s) are allowable but also the recommended method(s) of acquisition. Some schools may allow students to wear an appropriate hat acquired from any source of the student=s choosing. Other schools may direct students to a single distributor while still other schools may purchase hats in bulk quantity for resale to students on campus. Some schools may allow an unlimited variety of hats under the premise that any hat is better than no hat. Others may restrict the choice to a single uniform hat. Unfortunately, a severely limited allowance of styles, particularly if the selection is made without student input, might inhibit student cooperation which would defeat the goal of reducing their exposure to carcinogenic solar radiation.

Q: What features should one look for in selecting or recommending a good sun-protective hat?

A: Ideally, it should shield as much of the face and neck as possible. Baseball hats, visors, and caps are less effective although certain children with long hair covering the neck may still derive significant protection from a wide brimmed visor. The hat should be constructed of material which has a UPF or SPF of 30 or more. If not labeled, it should not allow light to shine through when held up to a light source. Among the best choices are:

A legionnaire (flappy-jack) hat styled like a baseball cap but with a wider visor and a fabric flap covering the neck.

Other considerations might include the hat's ability to retain its usefulness after being stuffed into a pocket or backpack, whether the hat is washable, how well it stays in place during outdoor activities, and whether it's difficult for children to bend it out of shape and thereby defeat its sun blocking capacity.

School staff members, not only to serve as role models but for their own protection as well, should always wear a sun-protective hat when outdoors between 10:00 a.m. and 4:00 p.m.

Encourage student leaders to wear a hat when outdoors and consider rewards for groups or individuals with the best hat compliance.

Schools may choose to order sun-protective hats for re-sale. Dress code policy could be set which would strongly encourage the specific hat(s) offered by the school to be worn for outdoor activities. Engaging students in the choice of style, fabric, and colors for the hat should result in more enthusiastic compliance and could boost school spirit as well. The hat could be custom designed with the school=s insignia, mascot, or school colors. (Sun Safety for Kids has negotiated with several of the hat manufacturers on our list to accept custom orders and/or provide wholesale prices to schools.) Proceeds from hat sales could be designated for supporting the acquisition of other needed sun-protection items such as trees or shade structures.

Hats could also be used as merchandise in a fund-raising program similar to chocolate bar sales campaigns. In contrast to the negative health benefits of chocolate bars, encouraging students to sell the school=s sun-protective hats would reinforce the sun safety message to the students and also create an opportunity for them to serve as proponents of a more healthy lifestyle for everyone.

The bottom line is that fewer of today's children will have to face the morbidity or mortality of melanoma as adults if they have been adequately protected from ultraviolet radiation during their youth. Developing the habit of wearing a hat outdoors is an important step toward achieving that goal. Please click on the "Policy Worksheet" bar for tips on developing your new hats policy.