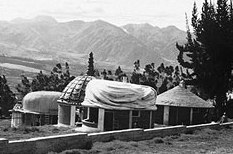 In the 1990's, we were traveling in Ecuador which is famous worldwide for hats. Panama hats primarily come from Ecuador's lowlands and foothills, while, in the Andes Mountains, wool and alpaca is used to make hats in various styles as well. Virtually everyone in Ecuador wears a hat and the country takes great pride in being a world leader in headwear.

Imagine how surprised and pleased we were as we approached the city of Otavalo, famous for its outdoor market whose origins go back centuries, and just off the road a community of houses was being developed with roofs in the style of individual hats. Yes - a top hat house, a military cap house, a coolie hat house, a tuban house, a bowler hat house, a military helmet house, etc.

The Hat Houses of Ecuador!