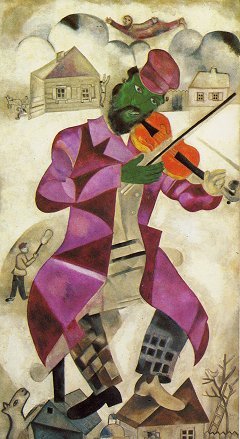 Marc Chagall's fiddlers, often floating over eastern European villages, wear caps that were commonly worn by European working class men in the 19th and early 20th Centuries. In many places, this headgear is not uncommon today. We see variations of this cap on the Dutch boy, the German bargeman, and, of course, the very popular Greek Fisherman's Cap.

Greek Fisherman's Caps, similar to the one pictured here can be seen at The Village Hat Shop.