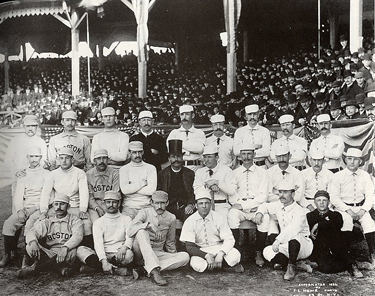 The baseball cap is an American icon. It is in fact the only hat style created in America. Its popularity in the United States received a big boost in the era of Babe Ruth, when baseball fans wore the cap as a badge of identification with their favorite team. This simple and functional style was a perfect fit for a country that glorified democracy, anti-elitism, and the like. Baseball, the national pastime and a passion for more than a few, also had the distinction of being the only American sport where a hat was an official part of the uniform. A cap could be created with the logo and colors of a basketball, football, or hockey team, but only in baseball could you wear an exact replica of the hat worn by your heroes on the field. From there it was a short step for truckers, farmers, and laborers to incorporate the ball cap as de rigueur in their daily attire. In the late 1980s and early 1990s, the baseball cap become a hot fashion item, propelled in large part when it became associated with hip hop music artists. Like Coca-Cola and McDonalds, the baseball cap became a symbol of America. Those who feared American hegemony wouldn't get near one, but those who wanted to identify with American popular culture, began their wardrobe with a ball cap on his or her head and sneakers on the feet. Today, I think you'd be hard pressed to find any American without at least one ball cap style in his or her closet, drawer, or car trunk. Imagine that! With the explosion of digitized embroidery and advances in silk screening, the ball cap with its message on the crown became a walking billboard. With a message on the top of one's head, the wearer could let the world know just what brands they preferred, their political point of view, their favorite activities, where they've traveled lately, their favorite band, movie or cartoon character, and of course, the roots of it all, their favorite team. Hence, a perfect headwear marriage, made in America. A simple, portable/pack-able, functional, even mundane, hat style popularized by middle-America now adorned with a personal, individual, specific, colorful, message attesting to the wearers unique preferences and choices.