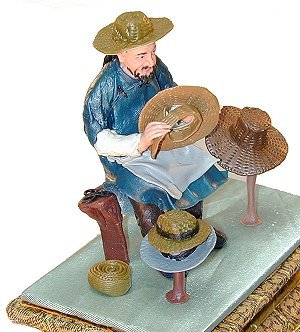 If historians are correct in that hats were the first apparel items worn by humans, then perhaps the first profession was not what is commonly purported, but rather hat making. After all, the need to protect one’s self from the elements may be even more basic than sex. There are in fact abundant examples, even on-going today, of native peoples weaving stems, roots, fronds, or leaves of various plants into headgear. On the winter hats side, the stories of the discovery of felt, a basic hat material, are legendary. We are aware of three different cultures that take credit for the discovery of felt [maybe all are true-a kind of parallel discovery, not uncommon in science]: 1. St. Clement (the patron saint of felt hat makers) discovered felt when, as a wandering monk, he filled his sandals with flax fibers to protect his feet. The moisture and pressure from pounding feet compressed the fibers into a crude, though comfortable felt. 2. Native Americans "discovered" felt by way of fur-lined moccasins, and 3. Ancient Egyptians “discovered” felt by way of camel hair falling into their sandals.

Considering either straw-hat or felt-hat making, the process is very labor intensive. Numerous hands are involved in the making of a hat. Preparation of the material and the initial creation of a hood or cone take many steps. From there, blocking and finishing further requires many operations. This pictorial is not an ordered step-by-step guide to hat making, but rather a variety of images that is meant to convey a general sense of the hat making process.

[The art work, above-right, of a Chinese hat maker is a VillageHatShop.com commission by artist Li Xiaopu. Mr Li's medium is flour dough. His email address in Beijing, China is bj_frt@163.com. Tell him the Hat Man sent you.]

The Village Hat Shop travels the world for headwear. Our Jaxon and sul la tete brands are manufactured in factories on four continents - Europe, Asia, North America, and South America.

Felt is a mass of wool and/or fur. It is not woven, but rather pressed and manipulated in a centuries-old process using heat, water, and pressure to create the strongest, smoothest, most water-resistant natural fabric known. Legends abound with regard to its origin. Some claim that St. Clement (the patron saint of felt hat makers) discovered felt when, as a wandering monk, he filled his sandals with flax fibers to protect his feet. The moisture and pressure from pounding feet compressed the fibers into crude, though comfortable felt.

Stitching In The Sweatband Read More

Biltmore Hats Corp. moves it's manufacturing to Texas after 95 years in Canada.