Monet, The Terrace at Sainte-Adresse 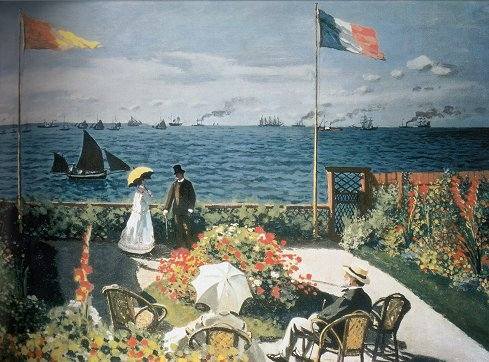 From a "hat perspective", this 1867 work is particulary interesting in that it is the earliest European art work, that I am aware of, depicting a Panama straw hat. "Panama" hats although actually made in Ecuador (see more on this in our HAT FACTS section), became important trade items in the mid-19th Century as commercial vessels passed the coast of S. America (spurred on by the California gold rush) before and after rounding Cape Horn. These hats became very fashionable in the eastern USA and Europe. Monet's seated gentleman appers to be wearing a model with a telescope crown, approximately 2 3/4 inch brim, with a black grosgrain ribbon band. This style, often called a "Gambler" is currently very popular. Given all the flowers in bloom and the lady with a sun parasol, I believe that the season is right for this straw and not the heavy felt top hat also depicted in the work. Is Monet contrasting these two, in part via their headgear?

Straw hats for men, similar to the one pictured here can be seen at Village Hat Shop.