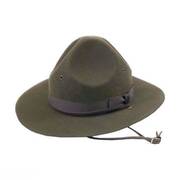 …The 1910's saw the advent of a true piece of Americana in the Montana Peak Hat (Campaign Hat). Its popularity "peaked" on September 8th, 1911 when it was adopted by the United States Army. What began as a military standard has since become a symbol of both protection and conservation as uniforms…