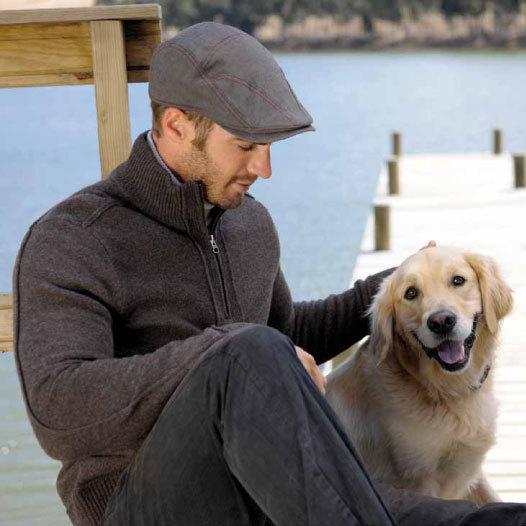 Newsboy caps and ivy caps – variously known as flat caps, baker boy hats, driving caps, golf caps, English caps, eight-quarter caps, etc. – date to pre-World War I and historically are associated with the working classes. In pictures from this period, as well as in literature, one finds factory workers, laborers, construction workers [there is a famous 1932 photograph by Charles C. Ebbets of construction workers on a beam over NYC - Lunch Atop A Skyscraper -where most are wearing a newsboy or ivy cap], etc. wearing variations of cloth caps. Because this headwear was cut-and-sewn primarily from either cotton or woolen fabrics, variations were plentiful and a man could easily distinguish himself from the next by his choice of color, material (e.g. tweed, herringbone, etc.), or style (cut). Furthermore, these caps were inexpensive when compared to the full size hats of the day like bowlers, top hats, or fedoras, so a person could own more than one and, if so inclined, change his hat from day to day. Because of the small size, soft nature, and portability of these caps, their popularity spread to young professionals, college fraternities (“ivy” cap as in Ivy League), sportsmen (“golf” cap as worn by the likes of Bobby Jones and Ben Hogan), etc. A man accustomed to dressing up for work during the week with a full size hat, could now wear this informal cap on the weekend signaling his “time off” while he pursued leisure activity without stepping down in class.

Today, the popularity of ivy and newsboy hats is perhaps second only to its ubiquity in the early 20th Century. The English-born Kangol 504 cap helped to revitalize this style in the mid to late 1990s. Movie stars, musicians, golfers, fashionistas, skate boarders, people young and old, can be found on a daily basis wearing a newsboy or ivy cap frontwards, backwards, or sideways. . Those who determined that this was “my style” quickly learned that the variations of this headwear style are virtually limitless. Many – like my father – make a hobby of collecting caps and make certain to pick up one or two while traveling in the British Isles or Europe.