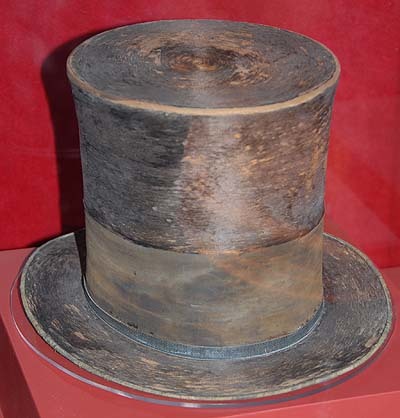 This top hat is at the Smithsonian Institution in Washington DC. I photographed it in April 2007. I was surprised to see the hat in such disrepair. Almost certainly, it did not come to the Smithsonian right after President Lincoln was shot as I doubt very much he would wear a hat that looked this shabby and worn out. I suspect the hat was handled, worn, etc. quite a bit before it went under glass. The "silk" finish was a popular felt finish in the mid-1800s - not so today where a flatter, "suede" finish is more popular. I was also surprised that the hat was not taller than it is for Lincoln's hat, by reputation, is higher (The hat looks taller in this image than it is). Lincoln's hat size was 7 1/8.

While researching this hat, I came across this little known Abe Lincoln hat story: http://rogerjnorton.com/Lincoln86.html 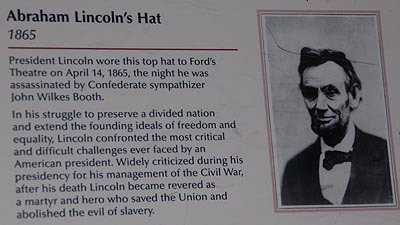