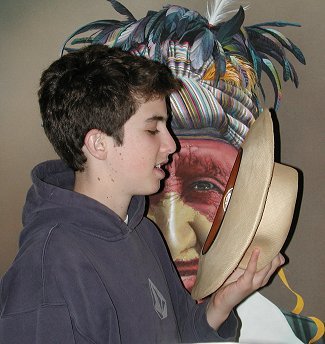 Talking Through Your Hat

To talk nonsense or to lie. c1885. [In an interview in The World entitled "How About White Shirts", a reporter asked a New York streetcar conductor what he thought about efforts to get the conductors to wear white shirts like their counterparts in Chicago. "Dey're talkin' tru deir hats" he was quoted as replying.]

There is no such thing as a sure thing, but that's where this expression comes from. If you tell someone you'll eat your hat if they do something, make sure you're not wearing your best hat-just in case. [The expression goes back at least to the reign of Charles II of Great Britain and had something to do with the amorous proclivities of 'ol Charlie. Apparently they named a goat after him that had his same love of life which included, in the goat's case, eating hats.]

Old, dull stuff; out of fashion. [This seems to come from the fact that hat fashions are constantly changing. The fact of the matter is that hat fashions had not been changing very fast at all until the turn of the 19th Century. The expression therefore is likely about 100 years old.]

Mad As A Hatter

Totally demented, crazy. [Hatters did, indeed, go mad. They inhaled fumes from the mercury that was part of the process of making felt hats. Not recognizing the violent twitching and derangement as symptoms of a brain disorder, people made fun of affected hat-makers, often treating them as drunkards. In the U.S., the condition was called the "Danbury shakes." (Danbury, Connecticut, was a hat-making center.) Mercury is no longer used in the felting process: hat-making -- and hat-makers -- are safe.]

A demonstration of humility. For example, "I come hat in hand" means that I come in deference or in weakness. [I assume that the origins are from feudal times when serfs or any lower members of feudal society were required to take off their hats in the presence of the lord or monarch (remember the Dr. Seuss book "The 500 Hats of Bartholomew Cubbins"?). A hat is your most prideful adornment.]

Literally to pass a man's hat among members of an audience or group as a means for collecting money. Also to beg or ask for charity. [The origin is self-evident as a man's hat turned upside down makes a fine container.]

Anything that is too tight. [The Dick in this case is Richard Cromwell, the son of England's 17th Century "dictator", Oliver Cromwell. Richard succeeded his dad and wanted to be king but was quickly disposed. The hatband in the phrase refers to the crown he never got to wear.]

In the 19th Century, men who wore derby hats specifically Eastern businessmen and later crooks, gamblers and detectives. [Derby hats, a.k.a. Bowlers or Cokes, were initially very hard as they were developed in 1850 for use by a game warden, horseback rider wanting protection.] Today, "Hard Hats" are construction workers [for obvious reasons].

An expression of incredulity. [Origin unknown. Help us if you can]

Throwing A Hat In the Ring

Entering a contest or a race e.g. a political run for office. [A customer wrote us with the following: "I read in "The Language of American Politics" by William F. Buckley Jr. that the phrase "throw one's hat in the ring" comes from a practice of 19th Century saloon keepers putting a boxing ring in the middle of the barroom so that customers who wanted to fight each other would have a place to do so without starting a donnybrook. If a man wanted to indicate that he would fight anybody, he would throw his hat in the ring.At one point, Theodore Roosevelt declared he was running for office with a speech that included a line that went something like, "My hat is in the ring and I am stripped to the waist". The phrase "my hat in the ring" stuck, probably because "I am stripped to the waist" is a little gross.]

"Hats off to the U.S. Winter Olympic Team" for example. An exclamation of approval or kudos. [Origins must be from the fact that taking one's hat off or tipping one's hat is a traditional demonstration of respect.]

A Feather In Your Cap

A special achievement. [I assume that the origins on this expression hail from the days when, in fact, a feather for one's cap would be awarded for an accomplishment much like a medal is awarded today and pinned to one's uniform. A feather, or a pin, add a certain prestige or luster to one's apparel.]

Hold On To Your Hat(s)

A warning that some excitement or danger is imminent. [When riding horseback or in an open-air early automobile, the exclamation "hold on to your hat" when the horse broke into a gallop or the car took-off was certainly literal.]

Bee In Your Bonnet

An indication of agitation or an idea that you can't let go of and just have to express. [A real bee in one's bonnet certainly precipitates expression.]

This of course is a metaphor for having many different duties or jobs. [Historically, hats have often been an integral, even necessary, part of a working uniform. A miner, welder, construction worker, undertaker, white-collar worker or banker before the 1960s, chef, farmer, etc. all wear, or wore, a particular hat. Wearing "many hats" or "many different hats" simply means that one has different duties or jobs.]

All Hat and No Cattle

All show and no substance. For example, in October 2003, Senator Robert Byrd declared that the Bush administration's declarations that it wanted the United Nations as a partner in transforming Iraq were "All Hat and No Cattle". [This Texas expression refers to men who dress the part of powerful cattlemen, but don't have the herds back home.]

To Hang Your Hat (or not)

At the Drop of a Hat

Fast. [Dropping a hat, can be a way in which a race can start (instead of a starting gun for example). Also, a hat is an apparel item that can easily become dislodged from its wearer. Anyone who wears hats regularly has experienced the quickness by which a hat can fly off your head.]

To Tip Your Hat or A Tip of the Hat

An endorsement of respect, approval, appreciation, or the like. Example: "A tip of the hat to American troops for the capture of Saddam Hussein." [This is simply verbalizing an example of hat etiquette. Men would (and some still do) tip their hat to convey the same message.]

My Hat Instead of Myself

This is an expression from Ecuador, home of the "Panama" hat. It means what is says; it is preferable to give up your hat than your life. [The Guayas River runs through Guayaquil, Ecuador's largest city on the Pacific coast. People from the city were known to hunt alligators for their hides in the river by swimming stark naked wearing Panama hats on their heads and long knives between their teeth. When the reptiles open their jaws and go for the swimmer, he dives leaving his hat floating on the surface for the alligator to chew on while he plunges the knife into the animal's vitals. From THE PANAMA HAT TRAIL by Tom Miller. ]

I believe this is a French expression for a bad person. [Ludwig Bemelmans' MADELINE series of children's books, set in France, includes one MADELINE AND THE BAD HAT. In this story Madeline, our heroine, refers to a little boy neighbor as a "bad hat". She clearly means this as a metaphor for a bad person and because I do not know the expression in English, I assume this is a common French reference. If anyone out there knows more about this, please drop us an email.]

Step by step. [Nevada Barr's book SEEKING ENLIGHTENMENT: Hat by Hat means just that. Has anyone heard this expression otherwise? If yes, please email us.]

Keeping Something Under One's Hat

Keeping a secret. [People kept important papers and small treasures under their hats. One's hat was often the first thing put on in the morning and the last thing taken off at night, so literally keeping things under one's hat was safe keeping. A famous practitioner of this was Abraham Lincoln. The very utilitarian cowboy hat was also commonly used for storage.]

Here's Your Hat, But What's Your Hurry

When someone has taken up enough of your time and you want him/her to leave. [Origin unknown.]

Carry His Office in His Hat

Operating a business on a shoestring. [Important papers and the like were often carried in one's hat.]

A young lady "sets her cap" for a young man who she hopes to interest in marrying her. [Long ago, maidens wore caps indoors because homes were poorly heated. A girl set her most becoming hat on her head when an eligible fellow came to call.]

To put on your "thinking cap" is to give some problem careful thought. [Teachers and philosophers in the Middle Ages often wore distinctive caps that set them apart from those who had less learning. Caps became regarded as a symbol of education. People put them on (literally or figuratively) to solve their own problems.]

Although I don't see or hear this expression as much as "Black Hat", it simply is the opposite of the above. [Good guys wore/wear white hats.] Both Black Hat and White Hat have new meanings in the context of Internet/IT hacking.

An insult to someone who expects something unreasonable from you, e.g. "No, you can't have my parking space Buddy. Why don't you go s**t in your hat and pull it down over your ears." [An old-school expression with roots from the WW II era.]

Changing Hats (with another person)

The switching of positions. For example, if one person initially wanted outcome "x" and the other wanted outcome "y" and at a later point in time, they switched their preferences, it could be said that they "changed hats". [Origin unknown, likely very old.]

Similar to above. Example: "I used to be a Yankees fan, but now I root for the Tigers. I've changed hats." [Origin likely very old, perhaps even literal when one changed hats going from one job to another or moving from the farm to the city, etc.]

If The Hat Fits, Wear It (or as Mrs. Crupp from Dickens's David Copperfield said, "Let them the cap fitted wear it")

This is a lot like Cinderella and the glass slipper. We'll know the truth if and when the hat, or cap, fits. [Origin likely centuries old.]