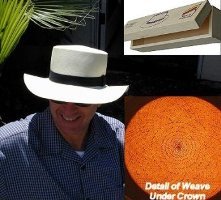 Some, like people on the western coast of South America (primarily what is now Ecuador), have taken this to the level of a highly refined craft. Carludovica palmata (paja toquilla to the locals) is harvested, cleaned, bleached, dried, split length-wise into various width sizes with the finest being the size of thread, bundled according to size and quality, sold to weavers who can take months to weave a single hat, sold again to middlemen who sell yet again to hatters who finally block the material into any number of popular shapes, finally adding sweatbands and trimmings. These straw hats make their way to the market in most of the world as Panama hats (not from Panama but so named because of the hat’s trading route explosion onto world markets during the building of the Panama Canal).

Other cultures have similar traditions. We here at the Village Hat Shop have employees whose cultural roots are from The Philippines. One day I was presented a finely woven straw hat traditional to the native people of Negros Occidental. The material comes from the inside leaves of the acaba tree. The hat is light and airy and, like Panama hats, the product of painstaking work. The people wear the hat for protection from the blazing sun of the region as well as for provincial festivals. Buntal, a popular straw hat material in North America and Europe -also fine and light weight-comes from yet another Filipino plant, the buri palm tree, from Baliuag, Bulacan. The list of exquisite straw hats made by indigenous people from endemic materials is very long. The Native Americans of the Northwest make a cedar bark hat. The native peoples from California make a hat from pine needles. Raffia is one of the most popular straw materials in the world. The island of Madagascar is the home of high quality raffia, but variations of the plant are also found in Africa. Many of the beautifully adorned crowns of feathers, shells, animal parts, and skins that we associate with African arts are started from a base of raffia straw. Baku, another lightweight, very fine, and expensive material that is in high demand in wealthier countries, comes from the taipot palm in Malabar and Ceylon (Sri Lanka). For my money, one of the best straw hat values in the world today is the very durable sewn-braid palm leaf hat from Guatemala, yet another example of a plant and a people in an enduring relationship.

Milan straw has a complicated and controversial history. The original material (if I have my facts straight) was a hand-braided wheat straw from Italy (hence the name Milan from the Italian city of the same name). Real milan, the natural material, is still available but becoming prohibitively expensive for most hat buyers. The Chinese make something synthetic and call it milan; this is mostly what is found in the hat market today. [Synthetic "straws" are all over the place and not the topic of this article other than this: if you are a buyer of what you assume is a "straw" hat, beware.] The Japanese make a material from hemp (I need a botanist to tell me if hemp bears a close relationship to the original) that is a natural material facsimile of milan. 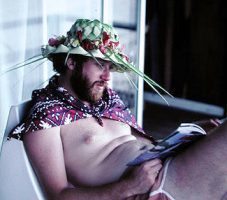 Some cultures whip up a hat in minutes from plants in their area. When I visited Tahiti in 1981, the local people would impress tourists by cutting palm fronds and weaving, from the unaltered material, a good hat for sun protection in 5 to 10 minutes. The hat starts out as green and becomes brown over time. When it finally becomes too brittle to properly function, one simply tosses it and makes another. Many cultures – likely the majority – operate somewhere between the extremes of complicated Panama hat making and simple Tahitian hat making. Perhaps, from a global perspective, the most iconic hat on the planet fits this description-the conical hat we associate with Asia. The shape has likely prevailed throughout time and place because of the simplicity of its design and supreme functionality. I have witnessed the hat as good rain gear, excellent sun protection, and a good wind break (one simply tilts into the wind). It’s very strong albeit lightweight; a structural engineer can explain why. The straw material varies from place to place. I own Chinese, Vietnamese, and Thai variations of the style. Each is made well and with minimal effort in order to achieve the hat’s purpose. Sometimes, one will find elaborations on the theme, but for the most part the hat is made to function well in the weather.

The American straw hat making industry traces its origins to Betsy Metcalf. Betsy may not have made the first straw hat in America, but in 1798, at age twelve, she made a straw bonnet that is believed to be the first documented straw hat made in the USA. Her next move immortalized her. She then “learned all who wished to make bonnets”, thus launching an industry. I’ve seen pictures of these early bonnets and the straw, neatly hand-sewn in rows, looks like “straw”-the stuff we see in bales found on farms.

Many straws are closely associated with a specific hat style. Coburg straw is associated with Italian Skimmers (also known as Boaters or Sailor Straws-think barbershop quartet). I don’t know which plant species Coburg straw comes from, but hats made from this material predate synthetics, so I am quite confident it is a natural straw layered in plies making the skimmer hard and durable. Shantung, the straw we associate with better western hats, has a history similar to milan. Its origins may be natural, but now it is a man-made material. Although many people associate a “Panama Hat” with the fedora hat style, this material is made into virtually all men’s and women’s hat styles. The optimo style – where there is a crease running laterally on the top of the crown – likely evolved from the natural crease created when a soft, unblocked, good quality Panama hat is rolled for storage or portability. Sinamay, the product of a process of preparing the acaba plant from The Philippines (see above) that includes weaving the straw on a loom has become a material of choice for women’s straw hats. In fact, it is the most popular millinery material in the hat-loving UK.

Many years ago, I traded for a hat made by the Cofans from the Agua Rico River of the upper Amazon in eastern Ecuador. This crown’s impressive feature is the green iridescent beetle casings that ring the headpiece. The casings are affixed to a sewn plant material from the area. Amazonia, First Nation Americans, remote regions of The Steppes, tribes throughout Africa, East Asia, India, etc. all have hat making traditions. Simply documenting whatever has survived into the 21st Century would be enough to justify a scholarly project. However, why did some cultures elevate this craft to art and others simply whipped off functional apparel? Is there a clue to other elements of cultural development and values that can be gleaned by this study? How did human cultivation of plants for hat making change an area’s botany? Were hats used for trade or were they considered useless outside of one’s indigenous region (in part because hats were so closely connected with one’s rank in the society, or religion, etc.)? Good questions could make a long list.

I’ve read that historians believe hats were the first apparel worn by humans. These hats of course were made from plants or animals. Where’s the book on this extraordinary subject? Much of the material is still out there.

For a more in depth look on Panama hats, please read our article: Hat Fibers of the Americas.