Change at the Top Sweeps Over Army 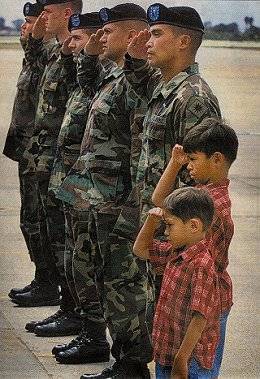 Because of time differences, 28,000 soldiers based in South Korea were the first to don the berets. After nine soldiers adjusted their new headgear at the Fort Bragg ceremony, a large birthday cake was cut with bayonets.

"We're also going to recognize that although this great institution has served the country for 226 years, it's got to change," said Lt. Gen. Dan McNeill, commander of Fort Bragg and the 18th Airborne Corps.

For years, the black beret has been the exclusive headgear of the Rangers, a small, elite force with a glory-covered history. Before Thursday, only two other Army units were authorized to wear berets: Airborne (maroon) and Special Forces (green).

Some Rangers have objected to the widespread use of the black beret, saying it would cheapen a symbol they won through rigorous training. For months, retired and active-duty soldiers have sought a reversal of the Oct. 17 order by Gen. Eric K. Shinseki, the Army chief of staff. A compromise last month gave the Rangers tan berets so they can still stand out.

ATTENTION SHOPPERS: THIS BERET IS FOR SALE AT THE BERETS PAGE OF THIS WEB SITE.