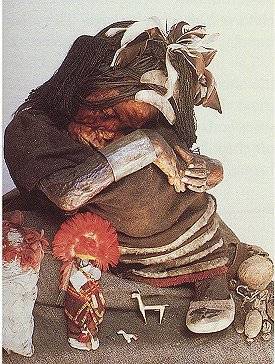 The fact that mummies have been found all over the world wearing hats certainly attests to the importance of headgear in virtually all human cultures. Headdress is in fact the most universally important part of costume, worn even when body apparel is dispensed with, as the appearance of the aborigines abundantly proves. Head attire in both sexes have from prehistoric times served to establish the individual’s rank or position in society, to impress the lowly and to challenge the enemy.

Like many ancient people, the Incas of South America buried various items of importance with the dead. This little boy was buried with, among other things, a silver statue with a cap made of parrot feathers. He also is wearing a feather headdress.