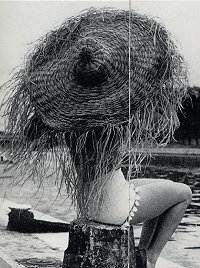 These hats began to be associated with the seaside as early as the 18th century, when people started going to the sea just for the fun of it. The hats not only protected the skin from the sun, they also became symbols of the outdoor life, freedom, and informality -- in short: vacation. The American straw hat industry was started by a 14-year-old girl. In 1798, Betsey Metcalfe of Providence, Rhode Island, copied an English straw bonnet she could not afford. She did it so well she received numerous commissions for fashionable straw hats and the industry was off and running.